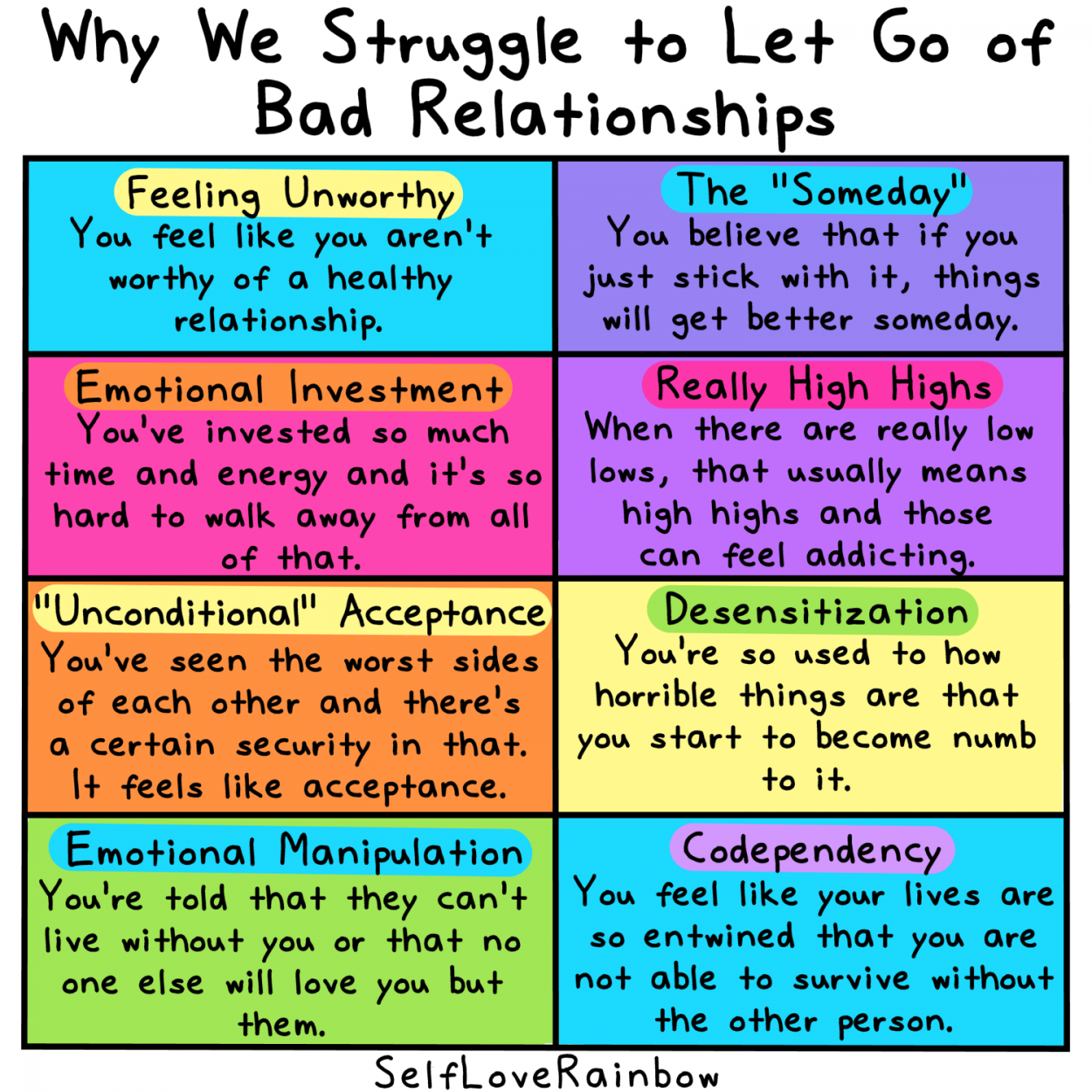 Last week, one of our lovely members of our Self-Care/Self-Love/Mental Health Group – The SoulSisterhood, made a post that made me feel some things and I wanted to write about those feelings. (Also, don’t forget to check out my workbook on dealing with toxic relationship break-ups!)

She’s in a great relationship, she’s happy, she’s treated well, yet she can’t stop thinking about her ex-boyfriend who she had a very up and down and somewhat toxic relationship with and she thinks he might be her soulmate, which causes her to have doubts about her current relationship.

Giiiiiirl. Who hasn’t been there? If you haven’t, count yourself lucky. It’s so easy to get wrapped up in those bad relationships. It’s so hard to leave, even from the outside where it seems so absolutely obvious that you should.

I started thinking about the specific reasons that we stay in those relationships and/or have trouble letting go.

My own story is this: Not terribly long ago I was in a toxic (and oh do I mean toxic) relationship with an alcoholic. I stayed for three years. This was while I was four years into running Blessing Manifesting. So, I was running this blog about loving yourself (you think I’d know better? I did too!). I was cheated on, I financially supported them, and I was manipulated and emotionally abused the entire time. And I stayed. We broke up nothing short of 50 times throughout those three years and each time I went back.

These are my own reasons or reasons that I think might relate to you.

Even if things started out wonderful, there comes a point where they aren’t. U normal relationships – it never gets better.

It takes so much work and so much energy and that’s something that’s really hard to walk away from.

There were times right after the final break up where I wanted to try again. I didn’t want to feel like I had “wasted” three or failed for three years, only for it to come to nothing.

My former relationship did not bring out my better self. I was so stressed out and anxious all of the time because I was dealing with someone in active addiction and all the things that come with that. My temper was short and a lot of the time she was intoxicated so that lead to many arguments.

We saw the ugliest sides of each other.

We were our ugliest selves so much of the time.

And there’s something safe about that, really there is. When we can show the very worst parts of our personality and someone still loves us anyway? Still stays? That’s almost intoxicating. There’s a certain sense of security – “Okay, this person has seen me at the very worst and I haven’t been abandoned.”

But it’s not, because while they aren’t leaving, they also aren’t there in a nourishing way that matters.

What I’ve Learned: I’m married now to someone who is absolutely wonderful and to be honest, there’s always that fear that my partner will see those aspects of me and that it will, in some way, change how she sees me.

(Totally normal fear by the way.)

But what I’ve learned is that to be with someone who brings out the very best in you, who helps you be a better version of yourself – it’s an amazing thing to experience. There’s a different kind of security and confidence that comes from being loved like that.

Relationships that are a constant emotional/physical war zone with “I love you and I’ll never leave you” at the end of every battle – are still war zones.

When we fight and argue and also when we make up certain chemicals are released into our bodies. There’s this rush of adrenaline and it can become almost addicting.

With my ex, we’d get into huge arguments at least twice a week, usually through texts, because again – healthy relationship *sarcasm*. Every argument would start with this rush of adrenaline triggered by stress and anger. Then comes the plummet – the depression after the fight, the deep dive into despair when you think everything is over. After that, the make up period – full of heartfelt apologies, sweet words, and declarations of love and those happy-inducing chemicals start being produced in your brain.

We go from adrenaline and cortisol – to this huge plummet, to this huge high of endorphins, oxytocin, serotonin, and dopamine.

Imagine doing this up and down, up and down to your body over and over again.

That’s what it gets used to. Most people in healthy and happy relationships have a steady supply of those brain-chemicals with minor surges of adrenaline and cortisol when something really upsetting happens. If you’re used to the roller-coaster it might feel like your relationships afterward are boring or not as passionate – that’s because your brain is still so used to those super high surges that it associates it with love.

What I’ve Learned: We get addicted to those chemicals. That’s why people binge-eat, that’s why they drink, use drugs, shoplift, skydive – it’s an addictive rush. When we acknowledge that the same thing is going on inside of us in relation to this bad-relationship cycle we are able to better understand it and recognize it as abnormal and something fixable instead of “fate”.

Toxic relationships tend to desensitize us to a lot of troubling behavior. We’re so in love with the person that we make excuses for behavior that we wouldn’t accept in other situations.

Eventually it becomes natural to defend that behavior. Or there are so many bigger, looming issues, that we push it away to be dealt with at another time.

There were things that I accepted in my past relationship that I can never imagine happening in my current one. I can’t imagine telling myself that it’s okay now.

If your bestfriend or sister came to you with a situation that was similar to yours and you’d find it alarming – chances are you’ve desensitized yourself to those things within your own relationship.

Being in Love With “Someday”

This was the major reason I stayed in my relationship. When you’re with an alcoholic you trick yourself into believing that the minute they get sober you’re going to get every single thing you ever wanted.

You just have to wait it out, be patient, and get to that point.

If the person you’re in love with isn’t the kind of person you want to be with, there’s a significant chance that they never will be. That’s not to say that people can’t change or become better versions of themselves – they can – but if you find yourself being in love with someday instead of someone – it’s probably not the right situation for you.

What I’ve Learned: Waiting for someone to change who isn’t committed to changing, or who doesn’t want to change – is an exercise in futility. Everyone says that actions speak louder than words – they do. Changed behavior is the best indicator that someone truly means the things that they say. Accept nothing less.

Many bad relationships contain an element of emotional manipulation. This can come in so many forms. I often heard “I would be dead if it wasn’t for you.” Words and phrasing like “No one will love you like I do. I’ll die without you. You’re the only thing good in my life. I couldn’t do this without you.”

Those are some pretty big statements. When we are convinced that we literally hold someone’s life in our hands – it’s hard to walk away. When we have been so conditioned to believe that we don’t deserve anything more than what we are being given – it’s hard to change that mindset.

Same thing with other forms of manipulation and abuse. It gets into your head and has a lasting effect.

What I’ve Learned: They won’t die without you and there will be someone out there in the world who will love you better. Who will listen to you, and respect your feelings and hold you in high You are lovable and worthy of love and don’t ever, ever, let anyone tell you that unhappiness is all you’re ever going to be worthy of.

So in short – if you’re having trouble leaving or you’ve left and you feel yourself being drawn back – keep moving forward. Know the underlying reasons. Know that you aren’t alone and that so so many of us feel these same things and then we come out of the other side happier and healthier.

Do you have trouble letting go of the bad relationships in your life? Are You Breaking Toxic Cycles?

Which one do you need to read today?

Do you remember these things? Do kids still make t